Ukraine is one of the largest countries in Eastern Europe. With a lot of classical architecture, majestic cathedral castles, ancient churches, to lush forested hills, Ukraine has a variety of amazing tourist destinations.

However, Ukraine is a country underrated. Alias, still not many tourists know that Ukraine has so many amazing places to visit. Not only that, compared to other European countries, Ukraine is cheap. Flight tickets start from IDR 12 million PP and lodging costs start from IDR 400 thousand.

At the moment, we can’t visit Ukraine yet. Apart from the ongoing pandemic, Russia has just invaded Ukraine on February 24, 2022 by launching a military attack.

One day, if all things improve, Ukraine can enter wishlist which is worth a visit. Therefore, the following are recommendations for hidden tourist destinations in Ukraine. Tourist sites in Ukraine that you can visit are Uman, which is located on the banks of the Umanka River, central Ukraine. According to history, Uman was first mentioned in 1616 as a fortified area against attacks by Tatar troops. Then, in the 1700s, Uman became even more famous because of the Haidamak rebellion which was quite tragic and claimed many lives.

Full of history that you can still trace to this day, you can visit the iconic Rabbi Nachman Sofiyivka Park, watch the obelisk in the city center while enjoying the Pearl of Love fountain show, and visit the Basilian Monastery which is the oldest building in the City of Uman. From a historical perspective, Odessa has been contested by various countries. First, Odessa was ruled by Greece, then taken over by the Turkish Ottoman Empire, and finally by Russia before finally becoming part of Ukraine.

You can find out more about these important histories when you visit Odessa, which has many amazing museums. Although the architectural style still maintains a classic design, pastel colors are applied to each building, making it look more modern.

In addition, there are also rows of cafes, theaters, and nightclubs that you can explore to get an unforgettable travel experience. If you dare, don’t miss exploring the catacombs (underground tunnels) containing real human skulls that are thousands of kilometers long. The two cities mentioned above are located in the city center and on the coast. If you want to visit a slightly different place, Rakhiv can be the location you can choose. Geographically, Rakhiv is the highest city in Ukraine surrounded by hills, forests and cold rivers.

Rakhiv is perfect for hiking. You can enjoy the cool mountains plus the view that spoils the eyes. If you don’t want camping, you can stay in the quiet village of Dilove. Here, you must taste the food, especially the special cheese.

It would be better if you came in September, Bela. Because, this month, the Hutsul Brynza Festival is held, which is a festival to honor the shepherds who had just returned from the Carpathians in winter. At this festival there will be dancing, singing, and delicious food. 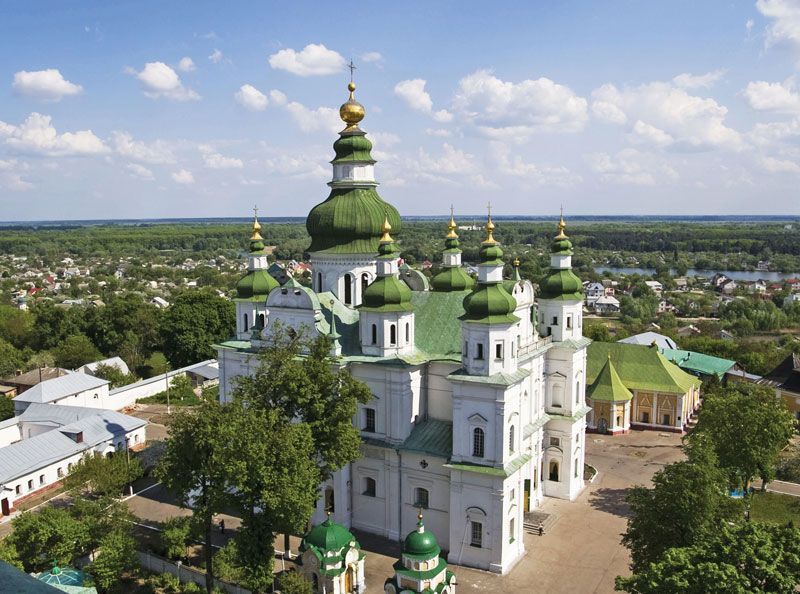 Chernihiv is one of the oldest cities in Ukraine, dating back to 907. The city was founded under the Rus-Byzantine Treaty between Prince By and the Byzantines. Despite being a city with hundreds of centuries of age, Chernihiv still maintains its authenticity with very little modernization seen there.

In Chernihiv, you will find many magnificent castles and churches with a typical medieval architectural style, which have domes and high ceilings. One that you must visit is the Catherine Church which has a golden dome and the Transfiguration Cathedral which was built since the 11th century.

For beer lovers, Chernihiv is the right tourist location. Because, Chernihiv has cherninihivske, a typical Ukrainian local beer. You must taste it the next time you visit. In winter, or around November to April, if you want to spend time on vacation, you can choose Bukovel as a tourist destination. This location is still relatively empty of visitors because not many people know about it.

Bukovel is surrounded by three snowy mountains, namely Mount Dovha, Mount Chorna Kleva, and the highest of the Carpathians. Due to this, Bukovel has lower temperatures compared to the rest of Ukraine.

With more than 50 kilometers of cable car runway running over it, you can also ski to your heart’s content here. But, remember to schedule a time here, yes. Best to visit Bukovel in December to April. However, in January, snow usually falls more extreme than other months. 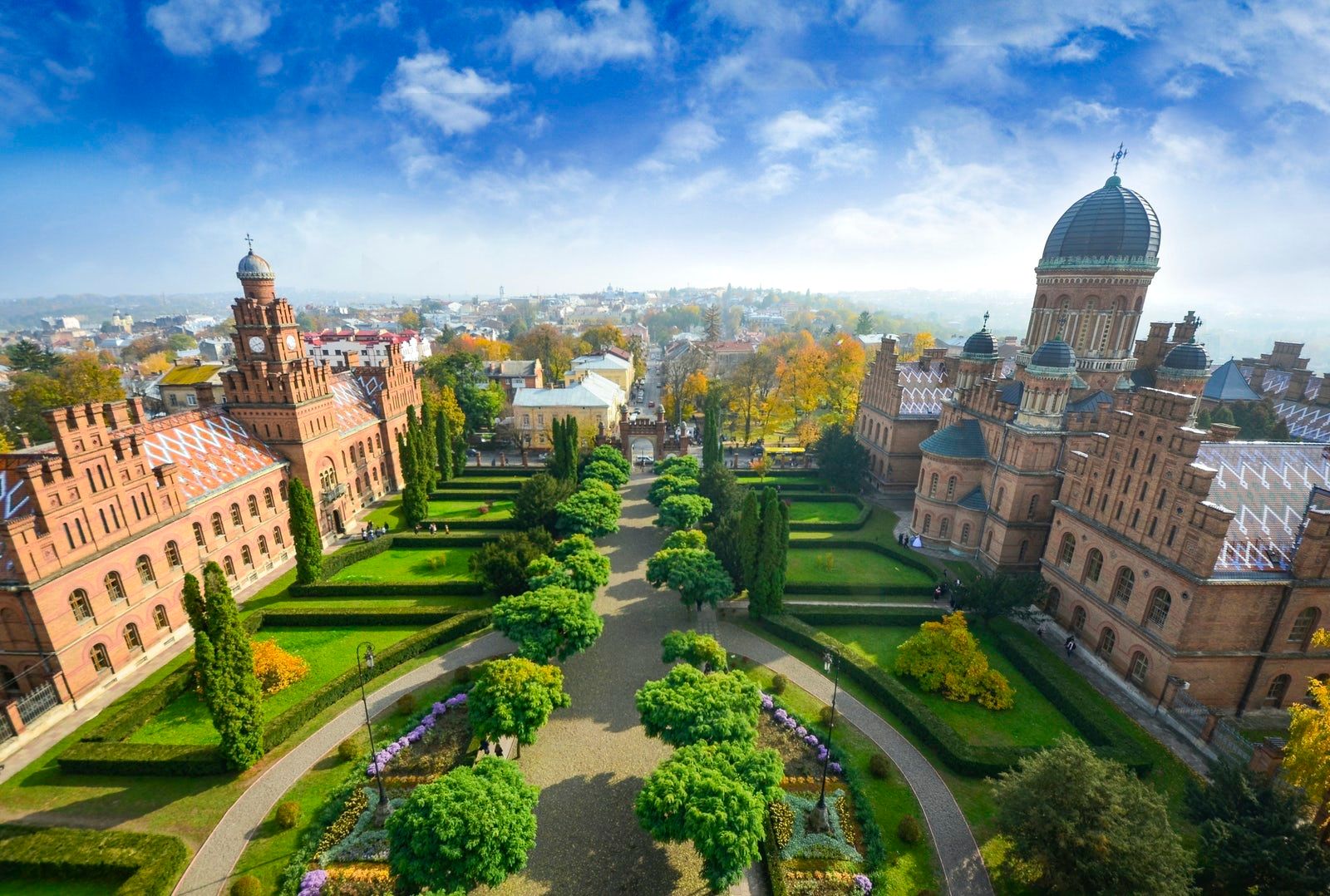 Chernivtsi nicknamed Little Vienna, because this city has an architectural design similar to the City of Vienna, Austria. This makes sense because Chernivtsi was once part of the Austro-Hungarian Empire.

If you are interested in continuing your education in Ukraine, Chernivtsi is the right location. Because, here there is the National University Ukraine which is the largest campus in Ukraine. In the vicinity, there are rows of bookstores, coffee shops, and open parks that are often filled with students when class time arrives.

If you’re visiting for sightseeing, Chernivtsi offers an impressive historical tour. You will learn archaeological finds from the Neolithic period, relearn the history of the Mongol invasion in the past, to visit old forts full of history. 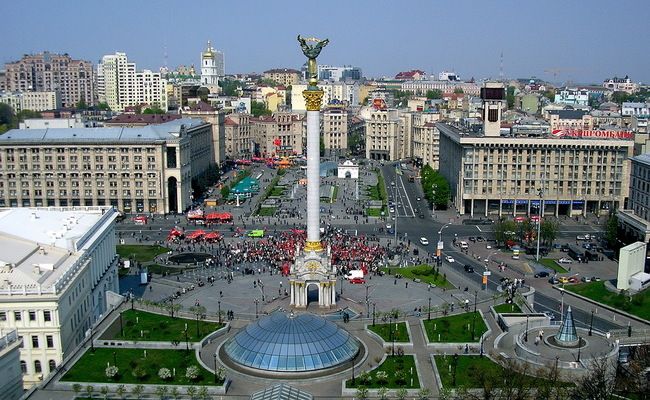 Talking about Ukrainian tourist destinations, of course we can’t miss Kiev, which also has a role as the nation’s capital. Kiev is the busiest city in Ukraine because the seat of government is here.

Being the oldest city in Ukraine, Kiev dates back to 482. Filled with striking Soviet architecture, monasteries, gold-domed churches and picturesque streets, Kiev is truly stunning.

Many museums and art shows that we can do here. Namely, the Museum of Folk Architecture and Ethnography, and the Kiev Pechersk Lavra. Don’t miss visiting Andriyivskyy Descent, a steep cobbled street lined with Art Nouveau-style houses complete with statues gargoyles. 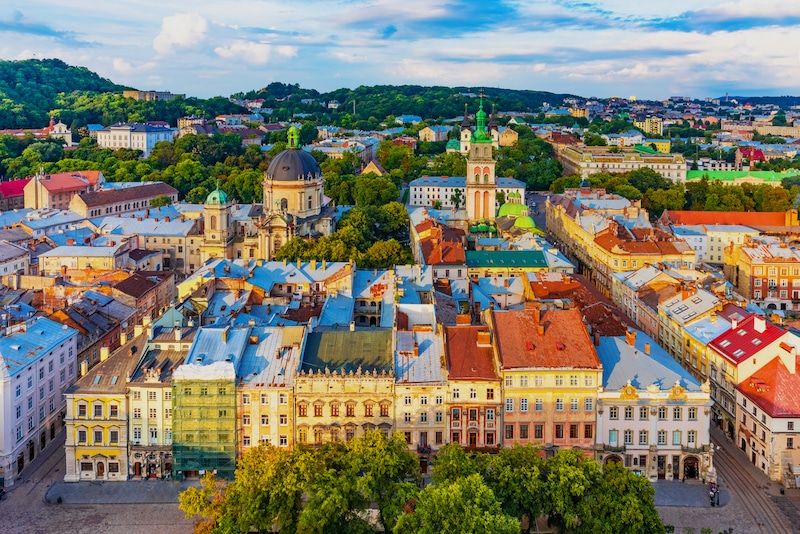 The next tourist destination in Ukraine that should not be missed is Lviv. This city in western Ukraine was founded in 1240 by the eldest son of the Ruthenian King.

Just like other old cities, Lviv has many monuments, museums, and ancient buildings that have a lot of history for you to explore. Dubbed as one of the most popular cultural centers in Ukraine, Lviv is also filled with art galleries, including the Lviv National Art Gallery, home to more than 50,000 works of art. 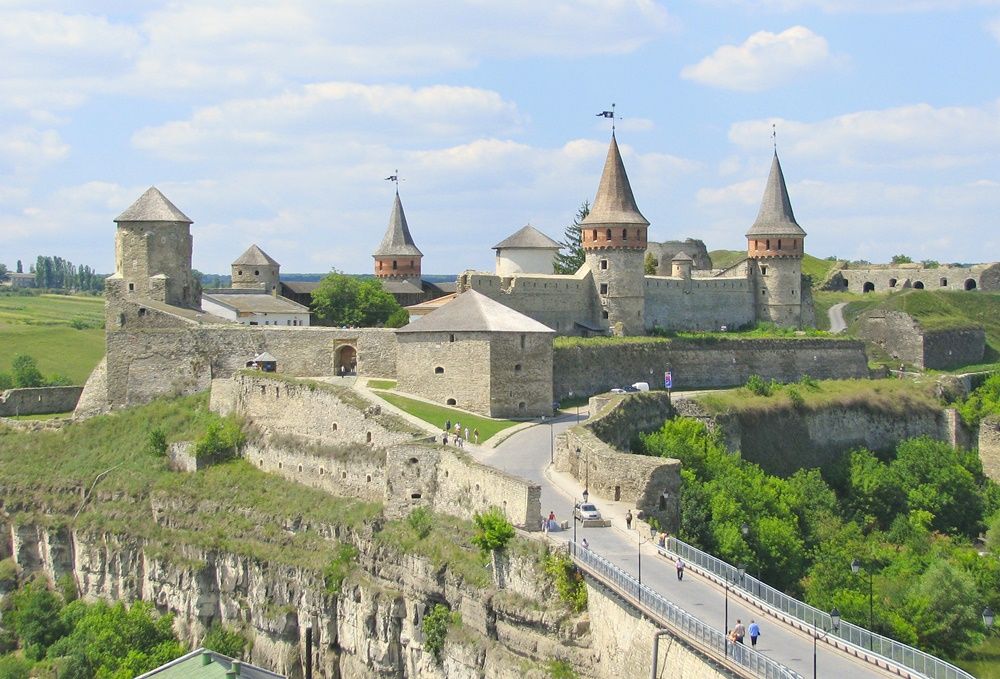 Kamianets-Podilskyi in western Ukraine is most famous for the Kamianets-Podilskyi Fortress. In fact, that is one of the main reasons tourists visit this fairy tale city. Towering over the Smotrych River, this fort is truly majestic. Ukrainians even claim that the fort is the most beautiful in Eastern Europe.

However, in Kamianets-Podilskyi there is more to it than just a fortress. You can explore the cobbled streets of the well-preserved medieval Old Town. There are also rows of beautiful pastel colored houses.

If you want to enjoy the sensation of hot air balloons, you don’t need to go to Capadocia, Turkey. Kamianets-Podilskyi also offers it along the Smotrichsky Canyon and Castle Bridge. Usually, hot air balloons will only be there once a year, namely during the spring festival. Located in one of the regions that are part of Crimea, Yalta is known as a resort overlooking the Black Sea. There is a long waterfront promenade for visitors who want to enjoy views of the Crimean Peninsula, and a zoo and an aquarium that houses dolphins can be found here.

For a more amazing sightseeing experience, you can take the cable car to the top of nearby Darsan Hill. Not far from there, there is also the stunning Froros Church which sits atop a sea cliff at an altitude of 400 meters.

That was the row recommendations for the best tourist destinations in Ukraine full of history. Hopefully the conflicts that occur can be resolved soon and we can visit there, yesBela.

Also read: This is the Estimated Effect of the Russian Invasion of Ukraine on the World Economy

Read also: Russia vs Ukraine, this is Nostradamus’ prediction about World War III