Swift called Braun a manipulative bully after Braun acquired his music catalog with sales of $300 million.

Swift lashed out at Braun who through his Ithaca Holdings acquired Big Machine Label Group, which was Taylor Swift’s label from 2006 until she moved to Universal Music Group late last year.

Scooter Braun isn’t the first celebrity to fall out with Taylor Swift. He has been hostile to other artists, such as the pair Kanye West-Kim Kardashian and Katy Perry.

The following are artists who have been enemies with Taylor Swift: Kanye West once made a commotion at the 2009 MTV Video Music Awards. The rapper suddenly took to the stage when Taylor Swift gave a speech after receiving the Best Female Video award.

“Yo Taylor, I’m glad you won. I’ll give you a chance to finish the speech, but Beyonce has one of the best videos of all time,” Kanye West interrupted Taylor Swift.

Two days later West apologized for the incident. But he said he did not regret his actions when asked about it again in 2013. He hardly even remembers the incident.

After that Swift’s relationship with West improved. They have greeted each other and even chatted at music shows.

“I respect him as a producer,” Swift said in an interview with Vanity Fair in 2015.

But feuds broke out again when Kanye West released an album The Life of Pablo. One of her songs, “Famous”, contains lyrics that credit herself with contributing to Swift’s career.

The “Shake It Off” singer was furious because he felt he didn’t give West permission to use his name or the lyric.

They denied each other, until one day Kanye West’s wife, Kim Kardashian, released a recording of a conversation that indicated West had gotten Swift’s permission.

In the feud, Kim Kardashian used the snake emoji to poke fun at Swift. But the singer actually gave a big role to the figure of a snake when he released the song “Look What You Made Me Do” from the album Reputation. Snake is also an important character on the tour Reputation. 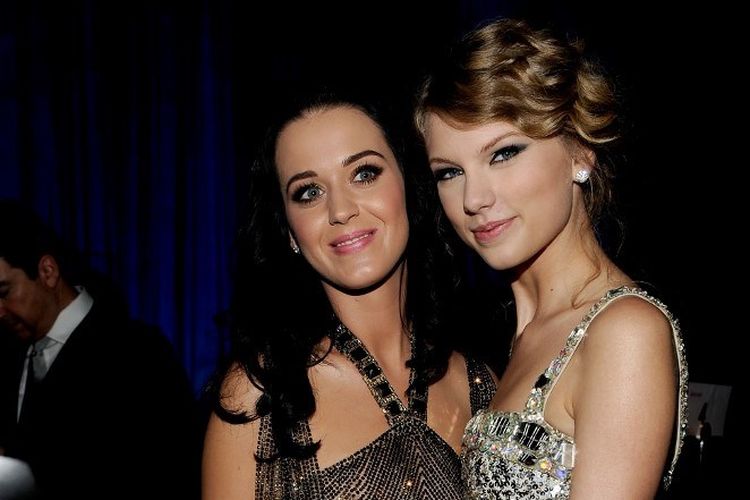 One of Taylor Swift’s most famous feuds is with Katy Perry. Before they poke fun at each other in interviews or social media, the two pop singers appear to be friends.

But in 2014, Swift told Rolling Stone magazine about her feud with a pop singer. This hostility became the inspiration for the song “Bad Blood”.

Swift never mentioned names, but netizens concluded that it was Katy Perry. This is allegedly related to the incident that Perry invited some of Swift’s back dancers to join her Prismatic Tour.

Perry seemed to justify the hostility with a tweet that read “Beware of Regina George in sheep’s clothing …”.

Regina George is an evil character played by Rachel McAdams in the film Mean Girls.

The feud lasted until 2018. Swift posted a video of Katy Perry’s apology message and an olive (symbol of peace) on her Instagram Story.

Perry’s improved relationship with Swift is evidenced by the appearance of the “Roar” singer in Swift’s latest music video, “You Need to Calm Down”. When she was not nominated for Video of the Year at the 2015 MTV VMAs, Nicki Minaj expressed her frustration on Twitter. She argues that it is very difficult for women of color who are not non-pop stars to get recognition and respect.

“If your video glorifies slim girls, you’ll get a nomination for video of the year,” Minaj wrote in her tweet.

Swift, who felt insulted that she was nominated for the song “Bad Blood” immediately responded to MInaj’s tweet. He accused the rapper of pitting fellow female artists. He did not comment on issues of race and inequality in the entertainment industry.

Nicki Minaj replied to Swift’s tweet. He considered Swift did not read his tweets well.

“Huh? You must not have read my tweet. I’m not talking about you. I like you. But you have to talk about it,” Minaj said.

Swift responded to the tweet by inviting Minaj on stage if she won the award. The feud did not seem to last long. They are called making peace quietly.

“I thought I was the one being attacked. I misunderstood what you meant, then misunderstood. I’m sorry Nicki,” Swift tweeted.

At the 2015 MTV WMA, Swift and Minaj showed that their relationship is back on track. They even performed together on stage.

The most unexpected feud is Taylor Swift with the comedian duo Amy Poehler and Tina Fey. This was triggered by their joke on the 2013 Golden Globes stage.

In a joking tone, Fey warned Swift, who had just broken up with Harry Styles, to stay away from actor Michael J Fox’s son.

Fey added that Taylor Swift needs to take some time to get to know herself.

Taylor Swift was asked for opinions on Fey’s jokes in an interview with Vanity Fair in 2013.

“There’s a special place in hell for women who don’t help other women,” Swift replied, getting the sentence from host Katie Couric.

Tina Fey admitted that she did not expect to get such a response from Swift. He insisted that what he said was a joke.

“I feel bad that he was offended. I’m a feminist and she’s still young and talented,” Amy Poehler told The Hollywood Reporter.