Pregnant women often experience insomnia or difficulty sleeping when pregnant, especially in the first trimester of pregnancy. There are various causes and one of them is associated with the physical and mental changes that occur during pregnancy. 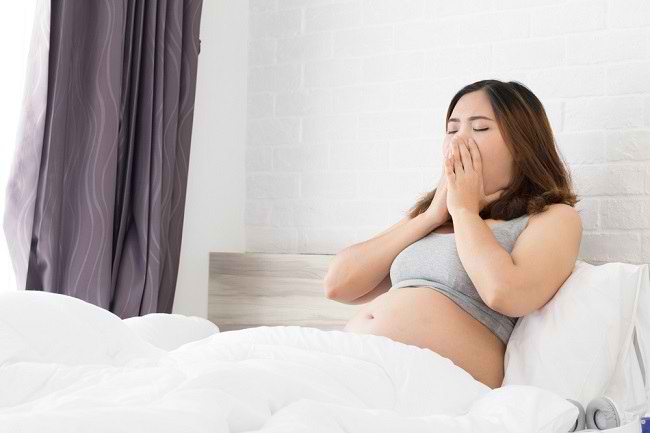 Various Reasons for Difficulty Sleeping at Night When Pregnant Young

There are several reasons for having trouble sleeping at night during pregnancy, including:

1. Increase in the hormone progesterone

Increased levels of the hormone progesterone in the body are actually useful for maintaining pregnancy. However, this condition sometimes makes pregnant women in the early trimesters experience fatigue during the day and difficulty maintaining sleep at night, such as frequent awakenings or difficulty initiating sleep.

This is evident in a study that examined the sleep patterns of a group of women before and after pregnancy. Total sleep time during early pregnancy increased, but they did not get quality sleep. This is then related to the feeling of weakness felt the next day.

Breasts during pregnancy are usually enlarged and painful to the touch. This condition can be a cause of difficulty sleeping at night when pregnant, especially if the pregnant woman sleeps in a position that makes the breasts depressed, for example sleeping on her stomach.

Therefore, it is important to adjust your sleeping position during early pregnancy so that pregnant women do not experience sleep disturbances.

Complaints of nausea during early pregnancy are often experienced throughout the day, including at night. Nausea is usually accompanied by vomiting, causing pregnant women to have trouble sleeping at night or wake up earlier than their scheduled sleep.

The hormone progesterone can affect the flexibility of the organ wall muscles when urinating, so pregnant women often feel the urge to urinate. Generally, pregnant women will wake up to urinate more than once at night so that nighttime sleep can be disturbed.

How to Overcome Difficulty Sleeping at Night When Pregnant Young

To overcome insomnia at night when pregnant, there are several things that pregnant women can do, namely:

One way to overcome insomnia at night when pregnant is young is to get used to sleeping on your side. Besides being able to make pregnant women fall asleep quickly, this position can increase blood flow and nutrients to the fetus.

Making time for a nap

Try to take a nap for at least 20 minutes. Naps can not only make up for the lack of sleep at night, but also reduce fatigue and improve mood.

Meet the needs of body fluids by drinking water in the morning and afternoon. Instead, limit drinking water a few hours before bedtime so that pregnant women don’t wake up often to urinate.

Make sure your stomach is full before going to bed

Difficulty sleeping at night during early pregnancy can also be overcome by making sure the stomach is full before going to bed. However, there are dinner rules to be aware of. Pregnant women are advised to eat dinner 2-3 hours before going to bed to prevent stomach acid from rising.

Actually, difficulty sleeping at night when pregnant is quite natural. However, if sleep disturbances persist and interfere with the daily activities of pregnant women, do not hesitate to consult a doctor so that they can be treated appropriately.